Of juggling and wading and balancing and shifting.

Almost two months of going through the gamut of human emotion.

Almost two months of elation and sadness and confusion and productivity and exhaustion and positivity and cocooning and laughter and frustration.

That if I couldn’t go anywhere, I’d instead go inside myself. And ask some questions.

Like why do I think the way I think? Am I using my full potential? What does success mean to me? What do I want to change? What habits do I want to foster? What stories do I tell myself? What really matters to me?

I have pages of questions and more pages of answers.

I have fostered new habits.

I have dug deep and I’m not nearly at the bottom.

I’ve realised there’s some things I miss about ‘normal’ life, but some I absolutely don’t.

I knew this period would offer growth, and clarity, but I didn’t realise quite how much.

I love getting uncomfortable — I’ve made a life out of it — but I haven’t often enough allowed the space for things to get really quiet. And really still.

Sitting — still, silent — with yourself.

Now I do it on the daily.

And, almost two months on, I can say with absolute assurance that you will bloom if you take the time to water yourself.

But as I’ve gotten older I’ve realised that some people are wired for negativity – they get off on being argumentative and combative. They thrive on being toxic. Thrive on destruction. And drama.

Negative people think they’re a victim of circumstance; positive people know they create their own reality.

So why do people persist with being negative?

And because it’s easy.

And most people are lazy.

But good things don’t grow in negativity. And do you know what’s louder than it? Positivity.

For those of you working hard to be positive; keep it up. Stay in your lane. Ignore negativity. Do not feed into drama. Do not allow toxicity to drain you.

Trust that other people will see the truth.

Because you can only hide in negativity for so long.

Because that’s a goal worth striving for.

If you can be unbothered by negative souls, then you’ll understand the true meaning of the word freedom.

And that makes you unfuckwithable.

When you are truly at peace and in touch with yourself, you’re unfuckwithable.

When nothing anyone says or does bothers you, you’re unfuckwithable.

When no negativity or drama can touch you, you’re unfuckwithable.

A dear friend recently described me as having ‘a no-fucks vivacity and an all-the-fucks heart.’ It might just be one of the nicest things anyone has ever said to me.

I do give no fucks, about the things that don’t matter.

I do give all the fucks, about the things that do.

I am unbothered. And unfuckwithable.

And I hope you can find the courage – and the calm – to be so too.

You have no idea how petrifying you will be to someone who only knows how to deal and trade in negativity when you’re unfuckwithable. When you’re positive. When you’re happy.

Their energy is wasted. Their words fall on deaf ears. Their efforts amount to nothing.

All the while you soar.

Stay in your lane.

But stay in your lane.

I promise you it’s worth it. 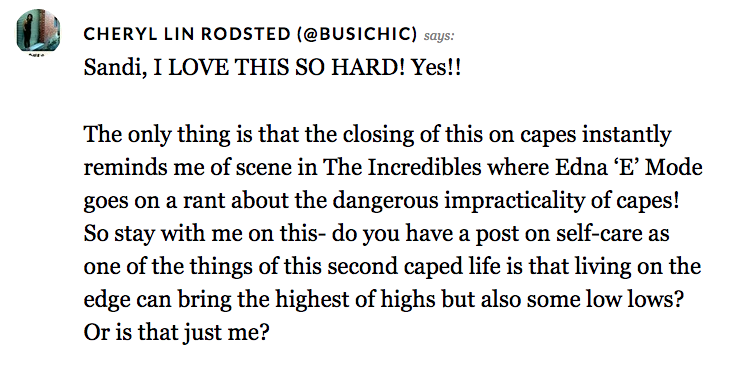 Cheryl left this comment on my last blog, asking how I go about self-care when it comes to wearing my, let’s call it, ‘cape of no fear’.

I’m not really sure how to answer or where to even start.

I realise that’s incredibly unhelpful, so I’m going to try and break it down.

I believe it’s one of my greatest assets, but also one of my biggest downfalls.

It’s where a lot of my strength comes from, but it also makes me blind as hell.

And it’s a double-edged sword.

When shit hits the fan, when things go wrong, when nothing feels right, when people screw me over, my ability to see the positive is ridiculous. My knack of finding a shining light in everything and – to a certain extent – everyone, is outrageous. But it’s all I know. Why I am like that – why I think like that – is beyond me. I just don’t know how to be any different.

The problem with that is sometimes I’m a little out of reality. I don’t think ahead too much, and I don’t plan enough, and I get kicked in the guts more often than I’d like because…because…because in my head, it’s different.

I’m not out of touch.

It’s just that I always always come out the other end of every hiccup, every challenge… happy.

I told you. There’s almost something wrong with me.

I still go through the motions.

Sometimes I can feel myself starting to harden. When I’ve been burnt or disappointed. And then I remember that while it’s hard feeling so much, it’s better than feeling nothing at all. And while on the inside everything feels like it’s crumbling, it’s really not. And when all I want to do is curl up on the couch and get lost in something, it’s better to get dressed and show up.

People often confuse my positivity with an assumption that the biggest challenge I’ve ever faced is a broken fingernail. It’s so ignorant of them. I don’t subscribe to the idea that if you’ve had a tough life – challenges, hurdles, obstacles – you need to be bitter about it.

I always choose the second option.

I don’t know why.

I just don’t know how to be any different.

So, Cheryl, for you, or anyone else out there that feels the highest of highs, but also the lowest of lows, know this:

It has to be that way. As long as you have some of both, and some days that fall smack bang in the middle, you’re doing it right.

We’ve got to stop permeating the idea that every day needs to be perfect and well-balanced.

On Thursday night, I shared a Facebook status from MND Australia, celebrating the fact they’ve had $500,000 donated in the past two weeks from the Ice Bucket Challenge.

The discussion very quickly moved away from the challenge and fast became all about me being a very insensitive and mean person for being so offensive. I did, after all, call people who are negative ‘miserable sods’.

Which they are. Well, at least from where I’m standing.

The thing most people that know me understand about me is this: I will never enter a debate, or be so incredibly headstrong during one, if a single fibre of my being is unsure about my exact opinion or the facts. And, during debate, I’m always open to other opinions and points and arguments – otherwise, you’re really just talking to yourself, aren’t you?

But here’s what people that know me also understand about me: I won’t tolerate bullshit. And name-calling. And finger pointing. And cowardice.

So I got called a bully.

And instead of bowing out (I gave an opportunity to ‘agree to disagree’), the person kept at it. And when I told them, if they continued, I’d give them something to be really offended about, they kept at it. So I told them to go and find something more productive to do with their day, instead of hassling me.

So I got called a bitch.

To be clear: being called a bully and bitch doesn’t bother me. I know I am neither.

What bothers me is that someone – this man – made our entire conversation redundant because he chose to be offensive (something he was admonishing me for, funnily enough) and, instead of answering the question, or raising a single point at all, threw his hands in the air and yelled ‘bully’ and ‘bitch’.

If you choose to enter a debate, be bloody prepared to battle it out, like an adult, leaving insults aside, and if you can’t handle it, don’t step up to the podium.

Or, as the old saying goes, don’t dish it out if you can’t take it.

I’m assuming I was called a bully and a bitch because I dared to question him. Because I didn’t back down from my opinion. Because I didn’t give in. And because I wouldn’t just darn well come out and say that yes, I was offensive and yes, you are right and I shouldn’t call people who are being negative ‘haters’ or ‘miserable sods’.

The real issue is I called him out. Period. I dared to hit him with a little bit of honesty, without sugar-coating my words, and he didn’t like it.

That’s not really my problem.

I don’t expect everyone to always agree with me. Far from it. I’ve had my opinion swayed far more times than I’d like to admit because I sat back and listened to someone else’s view.

I believe healthy and lively discussion is the only way people, and countries, really progress.

But there’s a big, big problem in Australia at the moment; the second anyone shares an opinion (whether it be your version of right or wrong, or completely outrageous) they’re shut down and ridiculed. If they’re well known, the media turns their opinion into a circus, if they’re not well known, they’re defriended on Facebook and blacklisted.

All for having an opinion.

Let’s get one thing clear: healthy, lively debate, where both sides are prepared to listen, but also belt it out, is vital. It’s vital to life, and relationships, and growth, and hope.

But when adults allow themselves to be disgracefully over-sensitive, when they allow ignorance to rule their mouths, and shut down their ears, we are left with a really big problem.

We become boring and dull and downright sluggish.

And whilst I’m not suggesting that everybody starts throwing opinions around every five minutes, I am saying we need to shake off this culture of shush and start learning how to listen and engage without being so offended.

I have absolutely no problem with the person that called me a bully and a bitch. I’d sit opposite them at dinner tonight and chat away happily. But I doubt they could say the same applies for them.

When did people become so petty? When did we, as a culture, become so offended, by everything, that it blinded us from what really matters?

I always believe that out of a negative comes a positive. And yesterday, when I was scratching my head and wondering how little this person must really think of me, the positive started to appear.

My phone started ringing. I started getting text messages. And private messages. It was from friends saying: ‘Well done.’ ‘Good on you.’ ‘Need me to put my fist in anyone’s face for you?’ And they kept coming from people I haven’t seen in far too long: ‘I love it when you speak and write.’ ‘Go for the jugular!’ ‘I’ve just read through the comments on your profile and this bloke is a bit out of line, I just wanted to offer my support to you.’ And then they started coming from people I don’t even really know at all: ‘I totally agree with you!’ ‘You’re bloody goooooooooooood.’

They are the very antithesis of stagnant.

I want you to know that you should always stand up for yourself and sticky by, and to, the things you believe in.

Most of all, I really want you to stop pussy-footing around. Around people. Around issues. Around ideas. Around yourself.

Be proud of who you are.

I sure as hell am.